There appears to be a bug in Rhino plugin where the U-factor does not change between metric and imperial units. 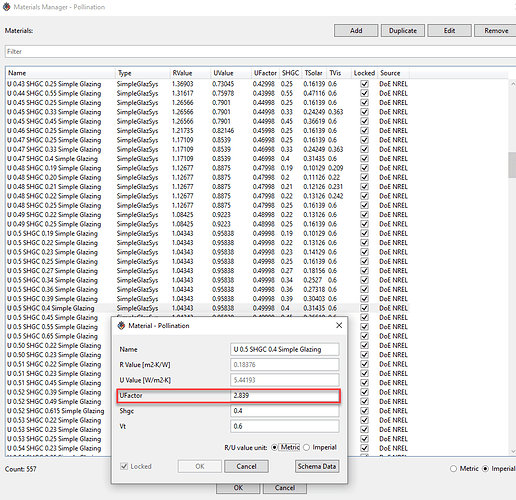 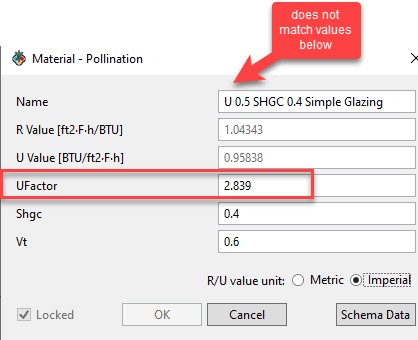 An example from IES, they call U factor (inclusive of film coefficients) the “net U value”. I’d expect in Pollination the glazing assembly U factor should match the value called out in the name. In snip below this is “U=0.5”.

I fixed the unit conversion issue between IP and SI.
Meanwhile, I am also improving all UIs to provide description of each inputs:

Did this version get pushed to public?

@chriswmackey might be a better person to answer this, but right now we use the same value for air film of all materials.

A new version should be ready in a couple of hours.

If the Rhino plugin is using the LBT core libraries to get the U-factor of the Window Constructions then this statement isn’t totally correct:

right now we use the same value for air film of all materials.

If you see here in the docs of the core libraries you’ll see that both the inside and outside film coefficients come from ISO 10292:

Thanks for explanation Chris. Could the actual calculated film coefficients be listed as well? Similar to snip above I included from IES.

I just wanted to say that showing the film coefficient resistance is a really good idea for an App that I have in mind that would enable you to test out individual window constructions under various different conditions and would look a lot like the IES window there. But this might be a little overkill for the table of all the different materials or constructions, which already has a lot of information in it and is really meant for a high-level comparison. Maybe we’ll put this into the plugin eventually.