We are considering jumping into Pollination as an extension with our Ladybug Tools-based workflow, and as a result we are semi-live testing the Pollination Rhino plugin now on a large project, which we have started: imagine 650+ rooms according to the room list, thermal zone-wise it is going to be much less hopefully, but we are not there yet. We are facing some serious slowdown in viewport performance at the first steps.

This is how I can make Rhino struggle

The “clean” Rhino model is really light there is no problem during editing at all.
If I use PO_RemoveProperties to clear all the rooms and apertures, the model speeds up again to the expected level.

Also worth noting, that we use Google Drive to store files, I had some problems with cloud service providers previously.

Since the model is large and confidential, I wouldn’t want to upload it publically, is there a way to get it to you privately to test, if you see the same symptoms? The Rhino model was modelled by a colleague, I looked into it for troubleshooting, it looks fine overall for the stage of the project.

The idea was to use Pollination for model management, but if we face such slowdown without tinkering too much, we might be better off backing out now to do the project in GH with LBT, until we haven’t started specifying details - but I’m not sure, since I’m new to Pollination. Yes, ideally a smaller project would be a better playground, but the advantages of Pollination (and especially the Rhino plugin) would be extremely useful for this one.

Any ideas what could be wrong based on my description?

Thank you for documenting this.

I have worked with models with +750 rooms with the Rhino plugin with no issues. You can send a private message on Discourse and share the link to the model with us.

If it is not too much to ask, can you also record a short video and show the steps to recreate the slowness problem that you mentioned above? I’m not sure if I follow all the steps here.

Thanks @mostapha , I’ve just sent you a PM.

Thank you! For anyone who might be following this conversation, I had a look at the model and I suspect it has to do with some visualization settings on your end. I had no issues working with the model. I shared a recording with you in the post.

I suspect it has to do with some visualization settings on your end.

I think you were right, I can’t replicate the slowdown after changing the Display Mode lighting setting to the one you suggested under Options -> View -> Display Modes.
I had a “Custom lighting” that was changed to this setup: 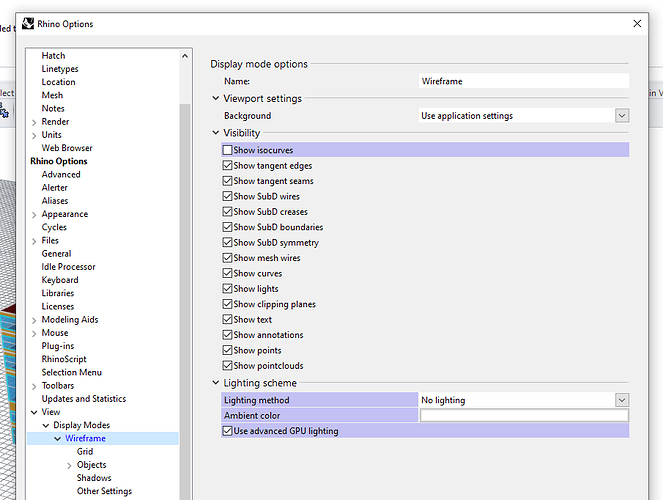 You also highlighted in the private discussion, that transparency in the Pollination render settings could be a suspect: 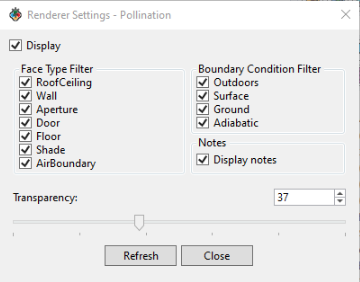 Changing this to 0 has an impact on the navigation speed too.

All this was experienced on Windows 10, with this Rhino build:

Thanks for the quick help, it saved me quite some hair on my head!

A colleague of mine who is working on the project in question experienced the same on her laptop.
When I changed the display settings as described above, it didn’t solve the issue, so I suspect something else is causing it.

The symptoms are the same: when using a command, e.g. PO_AddApertures, navigation is blazing fast, but when she goes back to “normal” navigation, the model slows down significantly. This is how I can get to this state:

What could be a solution not to lose hundreds of rooms created already?
(In this file we have approx. 400 rooms.)

After getting the geometry right I imagine we could load the PO Rooms to Grasshopper to continue editing there, but it is a long way until then.

Her laptop has an i7 and 16GB of RAM in it, so it should be enough for modelling - simulation would be run either in the cloud or on a desktop PC anyway.

That is strange! Sorry about the issue.

After reopening the “loaded” model, navigation is a struggle with navigation until I enter one of the Pollination commands.

Similar to the last time, we will need the model to be able to test and create this.

What could be a solution not to lose hundreds of rooms created already?
(In this file we have approx. 400 rooms.)

Can you export the file as HBJSON and then import it to Grasshopper using the Honeybee component?

After getting the geometry right I imagine we could load the PO Rooms to Grasshopper to continue editing there, but it is a long way until then.

Yes. But I would use the PO Model component instead.

Finally, what is the version of the Rhino plugin that you are using right now?

I’ve just sent you a PM with the model.

Finally, what is the version of the Rhino plugin that you are using right now?

It is the latest I suppose, I’ve checked updates on her machine today and installed it - we are out of office by now, so I’m not sure, I’ll get back to you once I get an answer from her.

Can you export the file as HBJSON and then import it to Grasshopper using the Honeybee component?

I’ll try it. The GH canvas was also pretty slow when this happened, though.

Thanks for the help!

Hello @mostapha ,
The Pollination Rhino Plugin version is 1.5.2.0, where we encountered this troubleshoot

Thank you again for the help!

Thanks! I added you to the private message. I can work with this model with no issues. See my comments there.