I’m running a custom energy simulation that works when I run it locally, but I noticed the pollination one was taking extra long so I checked on the webapp.

…but in the “Debug” tab it looks like a fail, however there are no logs and the parent node look like they are still running: 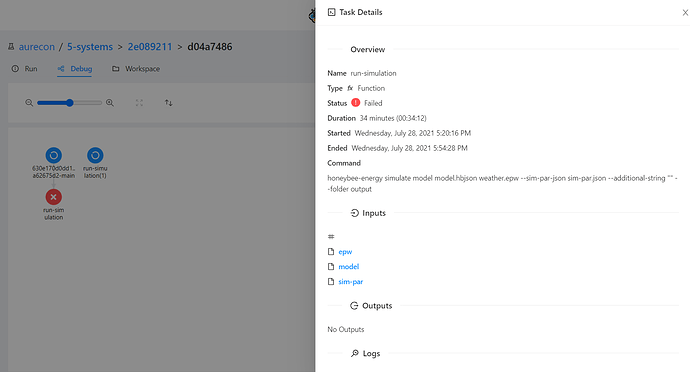 Could you please check it out for me?

I can’t view job using the API because it is inside of a private project. I have a look at the database and it looks like the Run has failed and been marked as failed. Could you check the UI again to confirm that the status is the same now?

I looked at the Run execution logs and it seems that the run-simulation step was retried multiple times. This usually indicates that something went wrong when executing the tasks on our end rather than because of the code/configuration used.

I suspect that somehow the task ran out of resources (we currently set a limit of 1 CPU and 3.5Gi memory per task) which might cause it to be failed.

Have you managed to retry this Job and see if it succeeds this time around? Would it also be possible for you to attach the files used + job config so I can try to reproduce this bug on my end? Maybe you can share it with me privately if you are weary of sharing such information publicly.

Thanks as always for the feedback!