Hah! You read my mind since that is next on my list after I have gotten the Annual Loads app in good shape. We want to make a Peak Loads App that will be a good alternative to other interfaces like TRACE 700. Except out Peak Loads App will use EnergyPlus and will include some nice graphics like this: 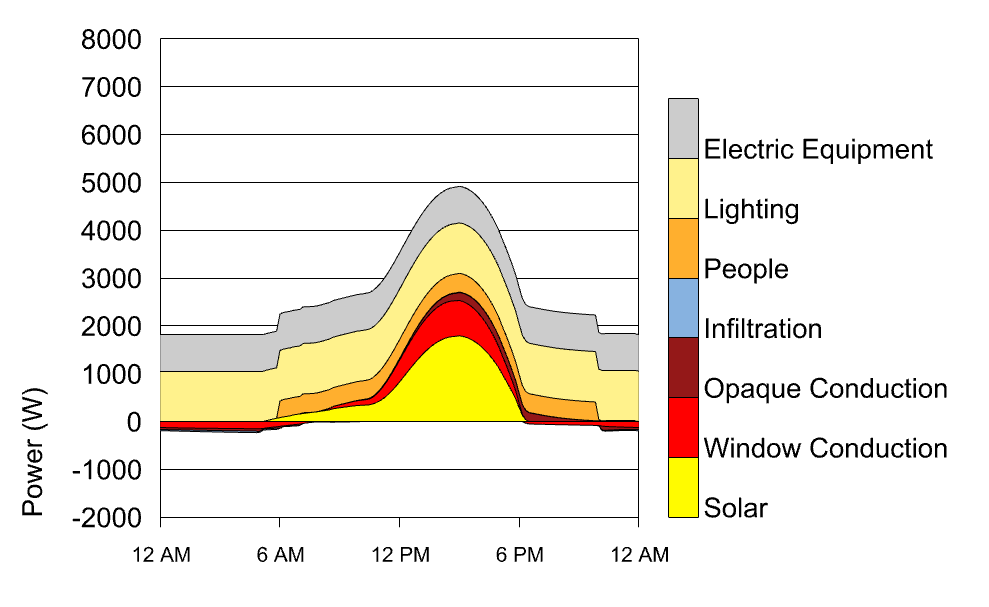 Peak Loads App will use EnergyPlus and will include some nice graphics like this:

Yes, that’s the plan! There will likely be separate apps for computing room-by-room peak loads vs. sizes of individual HVAC system components since the former can be computed much more quickly than the latter. The former also makes it easy to produce nice-looking load balances while the latter can get a little muddy since it’s not always clear where in the HVAC system the thermodynamic boundary is across which heat in = heat out.

In any event, I can post here when I have something ready to test.

I’ve found that mech. engineers use room peak loads to do a lot of sizing, even roll up to system level then try to apply diversity factor.

Perhaps, intermediate step prior to full equipment sizing reports/graphics, would be to list peak coincident / block load and sum of peak / non-coincident load of all rooms assigned to a system zoning scheme to understand load diversity factor.

Hi @chriswmackey - has there been any progress on load calc related apps?

We’re still been trying to nail down some of the core infrastructure that supports apps so I haven’t made a peak load app yet. For now, a Grasshopper script like this one is still the best way to evaluate peak loads on a pollination model.

Hopefully, you’ll see us hit a point soon where the apps infrastructure is settled and you’ll just see a lot of new apps from me going up quickly.

Thanks for the update!