Hi. I am having issues with LBt plugins after I installed pollination rhino plugin with its latest installer. I used ladybug vrsioner to keep LBT plugins update but when I did the restart it threw error and than all the components are double on the grashhoper panel. I tried to do fresh installation with rhino pollination plugin but after update all plugin duplicates. 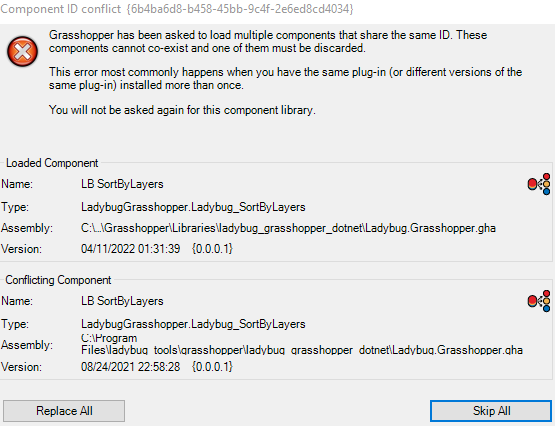 To add to this when I unistalled both LBt and Pollination from the inbuilt installer and reopened rhino all the plugins are still there. I had to manually delete dot net folder and userobject folder to remove it completely.

Hi @asisnath, we have moved all plugins out of “%AppData%\Grasshopper\UserObjects”, but I don’t know if @chriswmackey has updated the versioner to catch this case. If it is still the old version, it installs to the old location which is why you ended up with two copies on your machine.

Thanks for the reply @mingbo . So in short now using versioner will create copeis? so is versioner updating the files in new location now?

Hi,
Interesting. In my case, i see the UserObjects on both locations but i don’t get duplicate components.
-A.

A note for the new installer from now on, please uninstall all LBT plugins and previous Pollination plugins before using the new installer. We have changed the installation location for Rhino to load.

You’d end up with two copies of plugins and ID conflicts if the old version isn’t removed.

The benefit of this change is that both LBT and Pollination plugins will be available for all users who log in to this machine. So it will be much easier for IT to install the plugin on an employee machine.

For all user-specific files, now moved to %Appdata%\pollination and %Appdata%\ladybug_tools which won’t be removed if you reinstall any plugins.

Hi everyone. The Versioner has still not been updated to handle the new location as I have been trying to help fix some other issues that have resulted from us using a new installer technology.

I’ll try to push a fix to the versioner today. In the meantime, if you can keep doing your updated by uninstalling and reinstalling everything with the single-click installers, all should work well.

Not updated yet. I’m working on it as we speak. In the meantime, you’ll still have to do all versioning using the single-click installers until the next Rhino plugin release.

With the pollination installer ver 0.150.2 the error after versioner does not occur. Thank You

FYI, I mentioned this elsewhere but, thanks to the efforts of @mingbo , we now ask for Admin access whenever you run the Versioner. So this means you don’t need to always remember to run Rhino in Admin mode when you want to use the Versioner.