I just; before seeing this thread: am getting this error from trying to upload about ~1550 runs… which is odd;
Initially I had turned off the PO button: and using a boolean tog for _pollinate worked: But I realized I’d forgotten to put the sim params in; cancelled that job; and ended up turning the pollinate button back on; I’m going to turn it off again and re-try. I don’t know how that could be related but I’ll let you know if that works for some reason; I’ve got 4 more rounds of this volume to try and upload today sooooo I’ll be able to reproduce it if for some reason it does work that way

and that worked for whatever reason… no idea how that could be related but: 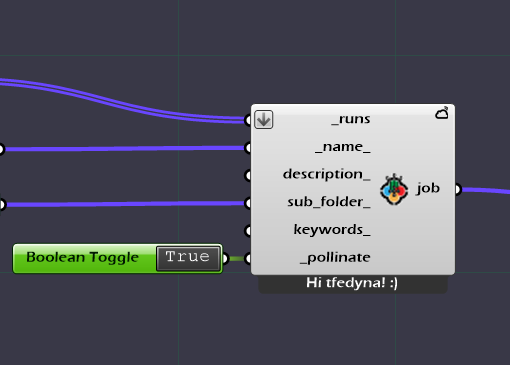 that worked, for the next 3 models with a zillion itters; I’ll try the button first than the boolean tog and report back if it seems consistent

Edit::
Seems to be working via boolean tog

while this is honestly just for my own learning and curiosity:
When there is the ‘pollinate button’ instead of the bool-tog: the status updating on the component is making simultaneous API calls to get the status to display,
Could that not happening during pollinating with boolean-tog:
could something about that Gh<---->API for the status message be causing the error when doing via pollinate button?

When there is the ‘pollinate button’ instead of the bool-tog: the status updating on the component is making simultaneous API calls to get the status to display,
Could that not happening during pollinating with boolean-tog:

Hi @tfedyna this is by design.

With the boolean toggle, the Pollination component will turn off the “Non-blocking” option which makes this component block the thread until finishing the compute. We think this is a behavior that users would expect, just like other normal GH components. With the “Pollinate button” on the component, we are able to show status (by a separate thread) on the component because it is triggered manually, unlike Boolean toggle input which could be switched parametrically.

That being said, when under the parametric mode, users want to get one result from a single thread like a normal GH component, instead of multiple threads doing several stuffs (including updating status on UI).

I am not sure if this makes sense to you.

Thanks @mingbo! I’m tracking on that now, thank you for sharing that information, I’m happy to better understand the two different methodologies now!