Hi,
I believe this topic was discussed a while ago but can’t find it.
In any case, i notice that after updating LBT+Pollination with the latest RhinoGHInstaller, all the user defined resources are deleted.
The installer deletes all LBT folder and the proceeds to install everything.

What i remember from the discussion i cant find is that a backup is made at C:\Users\USERNAME/.honeybee_standards. But this is not happening. I’ve found there an old version of the standards but not the latest though.

Can you update (@mingbo ?) what is the recommended procedure to be taken here? The best is to make the backup and restore the resources during the installation itself and make this process transparent from the user point of view.

Hi @ayezioro, thanks for bringing this up to the table again.

This is what a typical software does. Such as the Rhino: program is installed to a location (C:\Program Files) that is different from where all user’s files are saved. This makes it much easier to update the software without affecting the current user.

We have discussed this a few times internally, but it was never made to the top of our to-do list.
Any thoughts? @mostapha @chriswmackey

I’m in favor of making this change but @chriswmackey is the one who will be affected the most. So let’s wait for him and see what he thinks. I also think it’s about the time to make this change!

This is the way that I originally had it before we decided to put everything into a single ladybug_tools folder. Pretty much everything in the recourses folder is meant to be user-specific, including the EPW files that the user has downloaded and any extra measures that the user has installed. So, if we’re going to make a change like this, then we probably should take the whole resources folder out of the primary installation folder and put it in something user-specific. Then again, the whole ladybug_tools folder is already user-specific (under C:\Users[USERNAME]) so I don’t really know where we should move it to.

What if we just don’t delete the resources folder when uninstalling Ladybug Tools?

Thinking this over a bit more, I don’t know if the honeybee_standards folder has become stable enough that we might not want to overwrite it for certain cases in the future. In the last stable release of LBT 1.3, I recommended everyone use the uninstaller that @ayezioro mentioned because it was important that the older honeybee-standards folder be erased given that the schema of some of the objects in it had changed. And, if there is ever a change to the schema of these objects in the future, the honeybee-standards folder should, again, be erased and people should sift through the .honeybee_standards folder to see if all of their old objects are still valid.

The last change that we made to the honeybee_standards folder was back at the start of August of this year:

I realized that there will probably be a few places where having a typelimit for… integers will be useful (the most immediate one is dynamic constructions. So I'm making this change now before the next stable release where we plan to have everyone update their standards anyway.

Given that it hasn’t even been 6 months yet, I just don’t know if I can trust that there won’t be another change in the future. Perhaps even more scary is that, if the IDF representation of constructions, materials, or schedules change for a new release of EnergyPlus, then the honeybee_standards folder should also be deleted and the user should manually update all of their IDF libraries. Granted, EnergyPlus does not change the schema of these objects often but it does happen and it’s scary that this one is totally out of our control.

I don’t know if this is an option but if the installer can handle selecting components during the uninstallation process then we may want to use a separate component for user data. 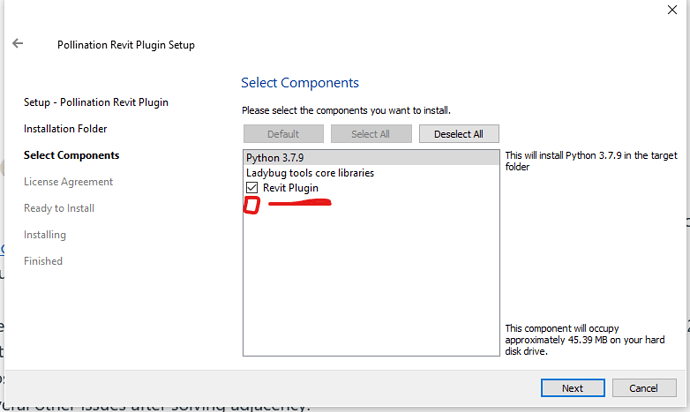 That said, this option will probably not work if they use the command line for installation.