This is a topic, that is doesn’t let me sleep well recently:
Pollination is by far the most comfortable energy modelling interface that I’m using – yet I need to abandon it often, when it comes to tasks, where detailed HVAC modelling is required (e.g. compliance modelling of the proposed building for certifications).

I couldn’t find a satisfactory way to do this:

@mostapha suggested in another thread, that Ironbug can be seamlessly integrated into the workflow, my questions are:

I would love to hear your thoughts!

I second these struggles and requests for detailed HVAC interface + training. Thanks for posting! In addition, Pollination ability for cloud/parallel computing would set it apart when compared to IESVE/DB.

Glad to hear this! We should use this as a testimonial!

yet I need to abandon it often, when it comes to tasks, where detailed HVAC modelling is required (e.g. compliance modelling of the proposed building for certifications).

The example here is useful. Am I right that it is mostly for compliance modelling? I’m asking because that’s something that can be automated.

What is your solution/the recommended way to add detailed HVAC systems to the models?

Are there available learning materials/tutorials on how to integrate Ironbug to Pollination?

@mingbo should be able to provide an example but for detailed customized HVAC the best option would be to read the model into Grasshopper and then add the HVAC system to it using Ironbug.

Is there a plan to create an interface within the Pollination Rhino plugin to make detailed HVAC creation easier to do? (Something similar to DesignBuilder’s interface?)

This will be a major undertaking for us. We have discussed the idea of better integration between Pollination and the OpenStudio application so you can use their HVAC UI from inside the Pollination, but it feels like you are not a big fan of their UI.

What do you like the most about DesignBuilder UI? I’m trying to understand if we can identify your most pressing needs and provide you with alternative solutions until we get a chance to implement it as a feature.

Am I right that it is mostly for compliance modelling?

A workaround could be a hybrid between PO.Rhino and grasshopper. I don’t know DesignBuilder or OpenStudio but in both IDA ICE and IESVE, HVAC systems are modelled in a separate window using grafical scripting, kind of like grasshopper. So might it be possible to create the HVAC systems using ironbug/grasshopper and then have the option in PO.Rhino to import a HVAC system through .gh file?

That being said, I do think that it is easier to understand a HVAC system in IDA ICE or IESVE than in grasshopper, as they visualize a loop, while grasshopper models “chains” so to speak. Hope that part makes sense

Am I right that it is mostly for compliance modelling?

In our use case, mostly yes, but as @victorbrac mentioned, optioneering between various HVAC system types are pretty useful too - a territory that I’ve just begun exploring.

What do you like the most about DesignBuilder UI?

I’ll try to summarise it:
with DesignBuilder, IDA ICE, IESVE, eQuest, etc. you can build/reflect the designed HVAC schematics according to the supplied drawings. An example (can’t really zoom in, sorry…):

image844×412 94.1 KB
This drawing was supplied by the HVAC designer in the project, a GSHP system with heat exchanger, SHW buffer, and various radiant surfaces (mostly floor heating) and FCUs on the demand side.

I’m in the middle of replicating this in DesignBuilder (so the scheme is far from finished), but imagine this accordingly: 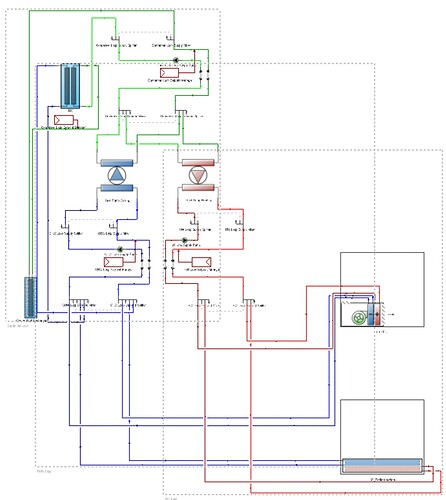 This Youtube playlists does a comprehensive summary on the capabilities of detailed HVAC modelling in DesignBuilder:

It’s somewhere between the traditional HVAC schematic and a Plant loop line diagram for EnergyPlus. I find this way more intuitional than switching between loops in OpenStudio, you can see the condenser loop in green, CHW loop in blue, HW in red, and at the end, demand side equipment is organised to “zone groups”, where zones with identical equipment can be grouped together with mass editing capabilities.

What do you like the most about DesignBuilder UI?

I think this is what I like the most compared to OS, because it’s a pretty efficient way of coming up close enough models of the designed systems – I would love to discuss this over some beers someday, what is “close enough”…

Which brings me to the next point:

The example here is useful. Am I right that it is mostly for compliance modelling? I’m asking because that’s something that can be automated.

The baseline generation is automated e.g. in DesignBuilder too, but the proposed HVAC system should comply with Table G3.1 in ASHRAE 90.1’s Appendix G: 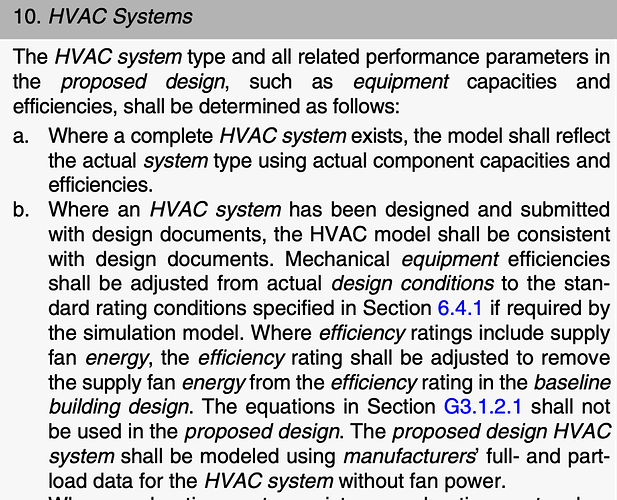 I can’t imagine this being easily automated, as this is changing on a project basis, sometimes resulting in multiple redundant systems to provide fail-safe heat supply.

Maybe I misunderstand what points a. and b. are stating, but how I treat the proposed model, is to model it as closely to the original HVAC schematic, as I can - maybe some cheating and simplification is required to get it running, but that’s the spirit that I’m working with.

I’m trying to understand if we can identify your most pressing needs and provide you with alternative solutions until we get a chance to implement it as a feature.

Having access to the OpenStudio Application’s HVAC Systems tab would be great.

I’m trying to describe what else I have in mind:
As most of the time this HVAC schematic is a line drawing supplied in PDF or DWG, I could imagine an interface, where you can use it as a reference to draw in a Rhino viewport, placing block-like key elements (e.g. a heatpump or a FCU) that are represented as Ironbug nodes in GH, making it possible to convert between the two representation (schematics vs. node-based GH script) seamlessly.
The polylines inbetween them could be pipes, ducts…

I suppose @victorbrac has more experience in this field than I do.
I would love to hear his thoughts in more detail!

So might it be possible to create the HVAC systems using ironbug/grasshopper and then have the option in PO.Rhino to import a HVAC system through .gh file?

…or convert the .gh file to the HVAC schematic - working both directions would be really nice.

That being said, I do think that it is easier to understand a HVAC system in IDA ICE or IESVE than in grasshopper, as they visualize a loop,

I was at the BuildSim Nordic conference in CPH not so long ago, there were many great examples of detailed HVAC modelling, and some guys use it instead of EnergyPlus for it’s simplicity. I haven’t personally used it before, could you summarise its strengths for us?

I would add Polysun, that was demoed at BSN (I didn’t know it before) for an even granular simulation of HVAC systems: 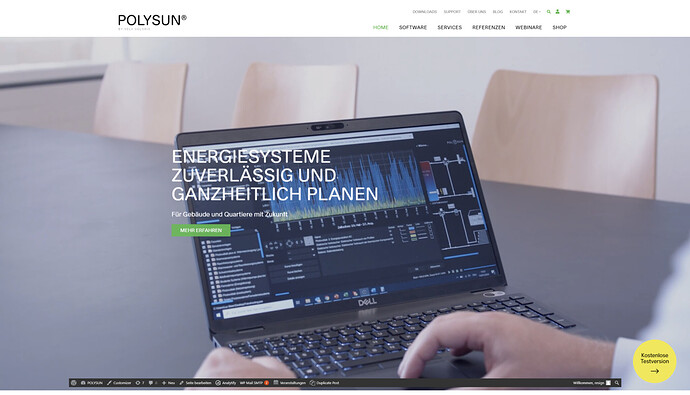 On the demand side it looked quite simple (the lady said you can enter it in a tabular way?), but it’s HVAC modelling interface seems stellar.

Generally, we’re applying detailed HVAC systems on each project. Typically through IES ApacheHVAC, since that is what our staff is most familiar with. This helps us better inform predicted EUI and electrical demand when absolute (I use this term loosely), not relative values are important. Applications: informing improvement over baseline as @furtonb mentions, energy benchmarking w/ predicted EUI, PV sizing (sometimes we’re given a target of X% site energy), electrical load to analyze microgrids / battery storage, load shifting through battery or thermal energy storage.

Is ironbug compatible with the existing pollination recipes?

Maybe Ironbug needs a dedicated foor4rhino page, or a link on the ladybug tools page.
If I’m not mistaken its only available through the github link, which means maybe people aren’t familiar with it or even know it exists.

I second the ask, is there youtube videos/other resources available for ironbug?

Thank you all for sharing your thoughts.

Is ironbug compatible with the existing pollination recipes?

Yes. The recipes accept OSM files. That means you can apply your HVAC systems to the model and save them as an OSM file.

Maybe Ironbug needs a dedicated foor4rhino page, or a link on the ladybug tools page.
If I’m not mistaken its only available through the github link

We currently package Ironbug with Pollination Rhino and Grasshopper installers to make it easier for people to get access to it.

Let us talk this topic over internally and see if there is a solution that can give you most of what you need without making this a year-long project. Ideally, we can re-use either Ironbug or the OpenStudio GUI from inside Pollination.

Hello everyone! @mingbo, @chriswmackey, and I discussed this earlier today. We decided for the first iteration to build our whole detailed HVAC workflow on top of Ironbug. Since Ironbug already works with Honeybee and Pollination it makes it easier to create a working example faster, collect feedback and decide about the next steps.

In short term, we will provide a few tutorials and sample files that show how to use Ironbug alongside Pollination. That should get you started with using Ironbug as Grasshopper scripts and running the simulations using Ladybug Tools or Pollination.

This should give you enough to be able to stay inside the Pollination ecosystem for all your studies. Ironbug provides a great templating feature that should make the HVAC definitions reusable among your projects.

We will prepare the initial material for an incoming private workshop next week and we should be able to release a modified version of that to the public after that.

We will integrate the Ironbug plugin into the Rhino plugin. That means you can use Grasshopper and Ironbug as the UI for creating detailed HVAC models that are directly connected to your Pollination Rhino model. These definitions will be stored in your Rhino file which means you can open and edit them as needed. With this solution, the HVAC will be part of the runs locally or using the Pollination cloud without the need to use Grasshopper. This also means that the information will live inside the file and during the life of the project.

If the midterm plan works as expected and we can confirm that the approach with Ironbug is good enough to address your needs during the projects we will discuss working on a brand new UI to make it even easier to build the systems. I hope that the option for mid-term evolves to be the UI for building a detailed HVAC system and saves us from building a new GUI but that is something to be seen.

Let us know if you have any questions or comments.

Thank you for the detailed response and including your near term and long term objectives. I will be interested in seeing how this develops and how UI facilitates managing large, multizone models and visualizing/customizing air and hydronic systems & controls.